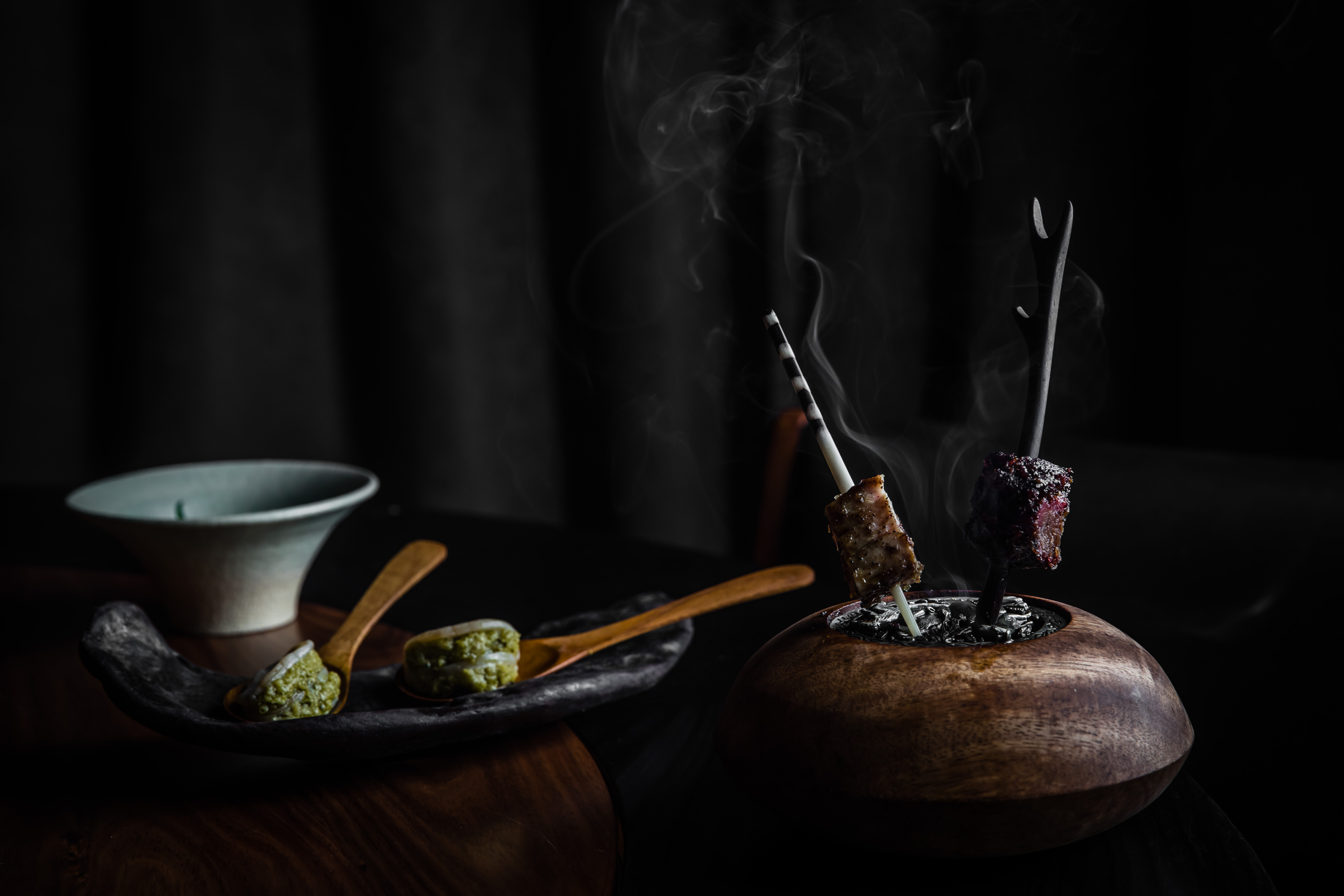 Review: Inside Orana’s pop-up, the restaurant Sydney is lucky to have

The first thing you notice is the smell. The scent of wood smoke sweeps through the room, coiling around hanging bushels of bush plants – eucalyptus, wattle, banksia – strung up low above the tables. They’re so low that at times you need to push through leaves and branches to move through the room, and their oils and the smoke, and the burnt legs of the tables give a sensation of walking through bushland after a backburning. Great swathes of curtains slung from high ceilings obscure walls and windows hide corners and break straight lines. Artworks depicting dunes and wetlands line the walls, and Aboriginal fishing nets and woven sculptures of native animals appear at every turn.

At several points in the meal smoke and fire will appear in different guises: a bed of hot coals as a means to cook potato damper skewered with lemon myrtle; a sheath of torched paperbark surrounding a golden and crisp-skinned quail stuffed with pork jowl and warrigal greens; a smouldering bowl holding skewers of Mayura wagyu and critically endangered (but, I’m told, sustainably ranched) southern bluefin tuna.

This is the Orana residency in Sydney, the result of a decision to take one of the country’s finest restaurants out of its home on Rundle Street in Adelaide and drop it into the old Longrain site in Surry Hills. Trucks were loaded, staff were moved, plates and bowls were thrown, wooden spoons were oiled and the doors were flung open. For a month in the 80-seat space, there’s a chance to bring Orana (winner of the Sustainability & Innovation category at the 2020 GT Restaurant Awards) and the work of The Orana Foundation, to the masses.

Over two and a half hours the courses – 22 of them, often served two or three at a time – hit on one of a few points. There are those that bring together common and less-common native ingredients. Things from the ocean, for example – prawns and oysters and fish – accented by things from the land or the odd billabong. Raw spot prawns enhanced by translucent slices of crocodile lardo – that is, cured crocodile fat – and powdery boab fruit. Warm, flinty angasi oysters popped open over coals given a heightened sense of the ocean with wakame paste. Delicate coral trout served in a broth infused with eucalyptus.

There are those that taste like the bush on a hot day when the oils release from the plants and the air is alive with their scent. Most notably two dishes from the Adelaide restaurant: buffalo-milk panna cotta in a pool of strawberry juice and strawberry-gum oil, and the kohlrabi cones flavoured with lilly pilly, lemon myrtle and Dorrigo pepper.

There are the dishes that use fire and coals as a central element, in keeping with traditional cooking methods, and no doubt gleaned from chef Jock Zonfrillo’s time spent on country with Elders, and no small amount of research. So it is that the potato damper – a staple from the Adelaide menu – is cooked straight on mallee root charcoal, which burns so clean it leaves no trace of ash on the surface. The same is true of a course of red kangaroo loin. It’s straight off the coals, charred on the outside and almost raw in the middle, layered over smoked mashed potato topped with wattleseed miso and sitting in a broth built on kombucha and pandanus vinegar.

Then there are those that push the envelope. A broth made with roasted crocodile bones – a by-product of the fashion industry, they say – is infused with bush leaves, and served from a teapot. On the palate it’s close to a brown chicken broth (the farmed crocs taste more like chicken, while wild crocs are closer to fish in flavour), but the dish takes a turn for the deadly when the dregs are poured out and topped up with White Rye whisky and crocodile fat in a twist on a Pickleback. Or stripes of razorfish, more like an enormous scallop with the texture of a clam, wrapped around gubinge (also known as Kakadu plum), its sharp sweet-sourness tempered by the kitchen brining the fruit as you would olives – years of R&D in a single bite. Or steamed savoury emu-egg custard topped with sea urchin roe, with a smear of bunya nut miso (bunya nut miso!) for salty oomph. Or fat fingers of Moreton Bay bug topped with a nest’s-worth of citrusy green ants spilling into a Geraldton wax sauce with a flavour of lime leaves.

And that’s without mentioning the bread that proves on the table only to return later as a baked loaf complete with macadamia butter, the segments of poor-man’s orange with jus gras and river mint, the buttery roti (nice; could be flakier) stuffed with veal tongue and Boon Luck Farm greens, or to get into the detail on the quail (boned, carved tableside, exceptional) or the kangaroo-grass shoyu that comes with it.

Some would call it relentless. But at no point during the meal are the details missed. Staff seamlessly sweep the tables in twos or threes, dole out hand towels (almost half the meal requires fingerwork) and run through details of ingredients like they’ve been eating them their whole life.

I couldn’t imagine the pressure to get in and out on an early booking, and it can be a slog to take a 9pm table for a meal that’s due to finish at 11.30pm at the earliest, but at least they’ve left a bar free for anyone waiting in the wings. (And if you’re ever going to try a Finger Lime Sour or a Tomato on Toast cocktail made with tomato juice and buttery, Vegemite-y ArchieMite gin – one of the most astute drinks I’ve seen mixed with the stuff – now’s the time.)

For the rest there’s a list of big, mainly pricey, and often top-shelf wines, two pairings (premium or local), and a non-alcoholic pairing consisting mainly of juices – some, like a rhubarb spritz, are intensely tart or sweet, others, like a juice of smoked desert lime and lemon myrtle topped up with lemonade, are resoundingly refreshing and addictive, while some others are more forgettable. The local pairing for one, which moves from low-intervention McLaren Flat grenache through to Yarra Valley pear cider and Tapanappa Chardonnay from Adelaide Hills, is geared to suit the various tart, astringent, acidic, floral and herbal notes across the menu.

It’s tempting to ask what Orana’s place is in Australia in 2019. And it’s necessary. People may point to the crocodile croquettes on the brunch menu at Single O down the road, the karkalla and iceplant garnishing grilled marron a couple of blocks away at Firedoor, or the finger lime gracing menus across the country, and say that the quest to bring Australian ingredients into the national vocabulary is over. With Orana it’s clear that we’re just getting started.

What’s so impressive, though, is being able to enjoy ingredients rarely seen gracing the tables of our restaurants and follow it with an exceptionally ripe ashed goat’s cheese from South Australia’s Woodside Cheese Wrights with fruit bread from Sonoma Bakery and pickled Moreton Bay fig shoots, and realise that all are equally valid representations of this land. Place can exist on its own, but the connection comes through people, whether they’re harvesting fig shoots, baking bread or making cheese.

In this frame, the idea of having something like roti on the menu, stuffed with veal tongue and greens grown at a farm run by an Australian-Thai woman doesn’t just start to make sense, it starts to seem essential. Calling it Tongue in Cheek feels somehow right. (That said, for a country that has such a history of baking, surely there’s something less twee than spins on Arnott’s biscuits to serve with the Jillungin tea.)

More than anything, this is cooking that’s dogged in its exploration of Australian ingredients, that defers to traditional skill and knowledge, but doesn’t forget time and place, the people who’ve come to live in this country, or the roots of its chef. To be able to bring all those things together into something as coherent, and delicious, as this is down to a man with a clear vision and the right people supporting it. Orana – here, there – deserves our support, too. And it’s still cheaper than flying to Adelaide and back to eat there. Go.